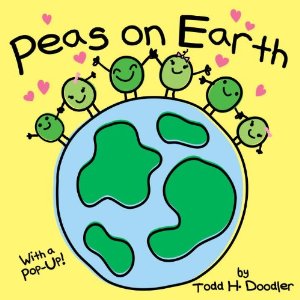 Peas on Earth is adorable! What could be better than a sturdy board book filled with hope and peace, um, peas. The art is simple, brightly-colored, and appealing; reminiscent of Todd Parr's style. And the concept is simple--promoting peace, harmony, and getting along with others.

As an added bonus at the end of the book, there is a pop-up of two happy peas dancing on the earth, shouting, "Give peas a chance!"

Todd H. Doodler is the pen name for Todd H. Goldman, founder of David & Goliath, a company that produces clothing and other merchandise that feature his designs. He's also the author of Animal Soup, The Zoo I Drew, and the Bear in Underwear series

I should have known you would love this one. :~)

This book sounds delightful. I love the word play, too.