Enjoy these tunes, full of poetry with your totz today! Happy Poetry Friday, everyone!

Posted by Lorie Ann Grover at 7:19 AM No comments: 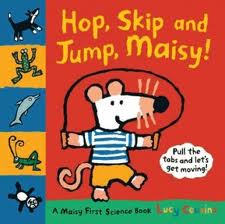 It's no secret that I'm a Maisy fan. I like the bold, bright colors and fat black outlines in these books. This is a hardcover book, but it's geared young like all Maisy books, and could easily become a board book. So it seems perfect for readertotz.

The pop-ups enhance the energetic movements here--kicking a ball, touching toes, and jumping rope, among others. The pop-ups move really well and are cute and clever. Although it's not as sturdy as a board book, it should hold up to use.

In the afternoon, Maisy skateboards and skips and jumps rope, like this.
Sidebar: Who else can skip? 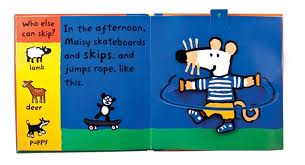 Perfect to get your energetic totz going!

Little Bobby Snooks was fond of his books,
And loved by his usher and master;
But naughty Jack Spry, he got a black eye,
And carries his nose in a plaster.

Happy Poetry Friday! May we be like Bobby, rather than Jack...
Posted by Lorie Ann Grover at 8:35 AM No comments:

Sometimes an illustration will just grab you. This was the case for me when I saw Chris Haughton's Little Owl Lost. Those big eyes just pull you in, right?

Little Owl falls from the nest and with the help of forest friends, he is reunited with his grieving mother. Are You My Mother comes to mind, but this work conveys so much simply with it's imagery, it deserves a place on your shelf. It will be loved. 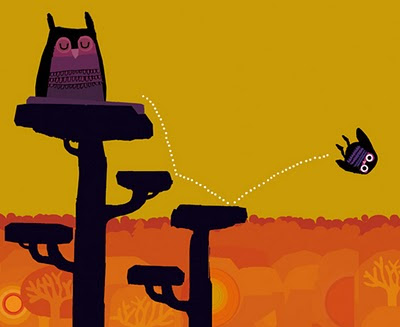 So cute I can hardly stand it!

As a literacy advocate, I have to recommend Little Miss Bronte, Jane Eyre for your totz! The BabyLit series is "a fashionable way to introduce your child to the world of classic literature." Yes, it's highbrow, but how can you resist a counting book featuring 1 Governess, Jane, and 4 towers, Thornfield Hall? The list includes chalkboards, trees, trunks, and pearls. An occasional quote is included: "I have as much soul as you--and full as much heart."

Author Jennifer Adams' text is paired beautifully with art by Alison Oliver. With colors that capture the time period, and delicate lines around printed forms, Jane Eyre is a visual delight in board book format.

Add a first copy of Jane Eyre to your totz' reading collection. "This book I had again and again perused with delight."

Doodle doodle doo,
The Princess lost her shoe:
Her Highness hopped,
The fiddler stopped,
Not knowing what to do.
Posted by Lorie Ann Grover at 10:49 AM No comments: 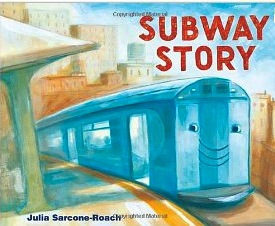 Jesse loves being a subway car in the city. She especially loves helping people go places. The recounting of her work and the people she carries is enthralling and simple enough for kids to understand even if they don't have experience with subways.

After a quarter of a century of service, she and older cars like her are replaced by newer models. At first, Jessie fears she will be abandoned and forgotten.

But when she is hauled away on a barge with other old cars, she is momentarily scared that her fate will be even worse. Even though I knew what was likely coming because I'd read the book flaps, I felt a pang of concern for her myself because I truly cared about this subway car by now. (Young readers will worry here too, but the dark moment passes in the turn of a page.)

All ends well when, in a very satisfying conclusion, Jessie (and the other subway cars) finds a new job in the sea as part of the underwater reef. Now...

Tiny creatures called coral cling to the same poles
that people held on to when Jessie lived and worked aboveground.
Hundreds of fish dart through the doors that people once used.

This picture book has heart. The author sent me on a journey from happiness to despair to happiness again, right along with Jessie herself. I like that the recycling message grows out of the story rather than being forced upon it.

This wonderful tale is based on the true story of 1960s era subway cars that are currently being used to create artificial reefs in the Atlantic Ocean. The one-page author's note at the end offers interesting factual info about the project of creating underwater reefs.

Subway Story
Author-illustrator: Julia Sarcone-Roach
Alfred A. Knopf, 2011
Posted by Joan Holub at 12:31 AM No comments: 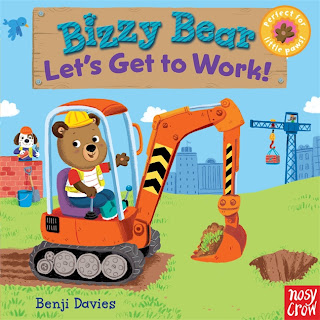 If your totz are construction fans, this will be a welcome treat. It's a simple sturdy board book that should stand up to rough handling (and possibly chewing!) It has lots of moving parts. For instance, the scoop you see on the cover will move with the push of a finger. For ages 1 to 3.
Bizzy Bear, Bizzy Bear,
lending a hand.
Bizzy Bear, Bizzy Bear,
push that sand!
You might pair this one with the picture book, Good Night, Good Night, Construction Site by Sherri Duskey Rinker and Tom Lichtenheld.
Bizzy Bear Let's Get to Work!
Benji Davies
Nosy Crow (Candlewick Press), 2012
Posted by Joan Holub at 12:01 AM 1 comment:

Poetry Friday: Elmo and Elvis Costello, Around the Block with Sesame Street

How about a little Elvis Costello for Poetry Friday with your totz? Sing it, Elmo and Elvis!

Posted by Lorie Ann Grover at 8:49 AM No comments: 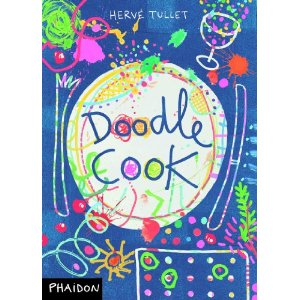 Think of an Art Kitchen. You have a paperback oversized book with a recipe on the left side and a blank plate on the right. You get to follow the artistic instructions and create beautiful dishes by drawing in the book. Like this for Zigzag Soup:

"Draw a BIG triangle on your plate.
Now draw another triangle, a bit larger than the first.
Draw a BIG circle....

Get the picture? Your dishes/drawings will include Blue Risotto, Crayon Puff Pastries, and Scribble Delight. My college grad couldn't wait to get her hands on Doodle Cook. I'm sure your little artists will feel the same!

Does you Leslie Patricelli collection include Tubby? We recommend you get this celebration of bath time for your totz!

It's time for Baby's bath. After undressing, there's the celebratory naked run followed by all things one must do in bathing. Playing with bubbles and counting clean toes are included.

As always, Leslie hits the mark in color, layout, and childlike spirit in Baby. You won't want to miss bath time with Tubby! And then of course, puppy will need a bath, too...

Tubby
by Leslie Patricelli
Candlewick Press, 2010
Posted by Lorie Ann Grover at 9:10 AM No comments:

Here's a beautiful book to celebrate Poetry Friday. Helen Frost's lyrical poem is set within Rick Lieder's closeup photography. Breathtaking. I wish I could share every page with you and your totz!

Step gently out,
be still,
and watch
a single blade
of grass.
An ant
climbs up
to look around.
A honeybee flies past.
A cricket leaps
and lands,
then sits back
and sings.
A moth flies
in and comes
to rest with
open wings.

Step Gently Out
by Helen Frost
photographs by Rick Lieder
Candlewick Press, 2012
Posted by Lorie Ann Grover at 9:21 AM 5 comments: