Baby's Book Tower is a boxed set of four chunky books (each about 2x2x2"), which are all reprints of Leslie Patricelli's best-selling, adorable, can't-find-enough-words-of praise-to-describe-them board books:
Baby Happy Baby Sad
No No Yes yes
Quiet Loud
Yummy Yucky

Baby Happy Baby Sad and No No Yes Yes are stories largely told through the illustrations, which are labeled Baby Happy or Baby Sad; No No or Yes Yes respectively. Baby is happy hugging the cat, but sad when the cat takes off. So true!

These books have heart and universal appeal. Totz will relate and so will parentz. I smile every time I read them. I'm so glad to see them in a set like this!

January: Around the Block with Sesame Street, Johnny Cash and Nasty Dan

Posted by Lorie Ann Grover at 7:00 AM No comments:

Email ThisBlogThis!Share to TwitterShare to FacebookShare to Pinterest
Labels: Around the Block with Sesame Street, January, Johnny Cash

Just showed this to my brother and realized it's perfect for totz Photo Friday! Enjoy Charlie once more!

Posted by Lorie Ann Grover at 6:00 AM No comments:

Have your totz add fresh water to the birdbath when it freezes! 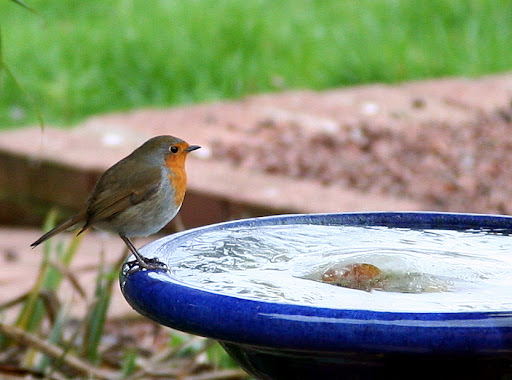 Photo from this album.
Posted by Lorie Ann Grover at 9:41 AM 1 comment:

January: For the Older Sibling, The Pixar Treasures 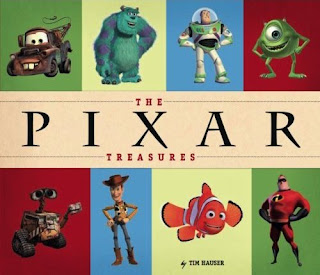 Tim Hauser titled this gem The Pixar Treasures, and he delivers! This is my pick for January for the older sibling of your totz. There's something here for your whole family.

From the company's inspirations and inception through their collected projects, you'll experience the Pixar journey. With a warranted nod to Disney, Hauser walks you through the chronicle of a group which has given us greats such as Up and Finding Nemo.

Included in the book are reproductions of tickets, passes, posters, cards, and brochures. Letters and notes open the backstory further.

The collage layout of the book and fantastic photo endpapers, reveal the fun of Pixar. As Tia Kratter noted, "If the people around you are fun, and, despite the hard work are making it fun, well, then it makes it okay. It's a laughing family." There's no doubt of that!

Find The Pixar Treasures and enjoy the story and treasures with your family. Marketed in a box sleeve, how will you be able to resist it when you remove the book to find Woody on the front cover and Buzz on the back? They're our friends, right?  Thanks, Pixar!

Here's a shout out for a picture book to board book conversion! I love this new edition of A Book of Sleep.

Il Sung Na's simple text combined with fresh, original art will captivate your totz. Nothing is cuter than the wide-eyed owl watching everyone sleep through the night. Some sleep quietly, others make noise, while some sleep on the move.

The layers of texture combined with flower patterns and whimsical little sketches delight and engage. Knopf nailed the right format by bringing this work to little hands. Bravo! Starred reviews from Booklist, PW, and School Library Journal are well deserved.

Sorry I missed our Poetry Friday, everyone! My computer was stolen and that has put a serious kink in my output. Hopefully all will be back to normal soon. In the meantime, enjoy this dear photo from Early Experiences.

This is exactly what readertotz is about. Here's to you reading to your totz! ~Lorie Ann
Posted by Lorie Ann Grover at 6:11 PM 1 comment:

We're going a little young for totz this time, with this interactive stuffed-cloth book for ages 1-3. It's made up of four 2-sided pages and has cars, planes, trains, and trucks as well as a squeaker toy in the front cover and a mirror inside "for busy hands and minds". It's part of Scholastic's developmental publishing program intended to give babies and toddlers a head start in learning. Sounds good to me. Beep! Beep!
Beep! Beep!
Jill Ackerman, author
Michelle Berg, illustrator
Scholastic, 2010
Posted by Joan Holub at 12:00 AM No comments:

Poetry Friday: Once I Saw a Little Bird

Once I saw a little bird
Come hop, hop, hop;
So I cried, "Little bird,
Will you stop, stop, stop?"
And was going to the window
To say, "How do you do?
But he shook his little tail,
And far way he flew.

Happy Poetry Friday, everyone!
Posted by Lorie Ann Grover at 7:00 AM 1 comment:

Joan and I don't often review licensed character board books, but every now and then, one just grabs our hearts. Disney Baby Hugs and Kisses is my pick for this week. It's from the series "Together Time."

With satin heart cutouts, your totz can count along as favorite Disney characters share their love with precious babies.

Cinderella's mice, the Aristocat kittens, and even Baloo share their love. The final spread shows a mother hugging a baby with the assurance, "I love you, Baby!"

How can you not love this board book? Pick it up now or for Valentine's Day. Share a few hugs and kisses.

Happy Poetry Friday!
Posted by Lorie Ann Grover at 9:32 AM No comments:

Just realized we didn't feature December's Community Service. So here it is. Certainly doable for January, don't you think?

Decorate that front window with your totz' cut-out snowflakes. Let everyone be charmed!
Posted by Lorie Ann Grover at 10:23 AM 3 comments:

Tuck Me In! Dean Hacohen and Sherry Scharschmidt 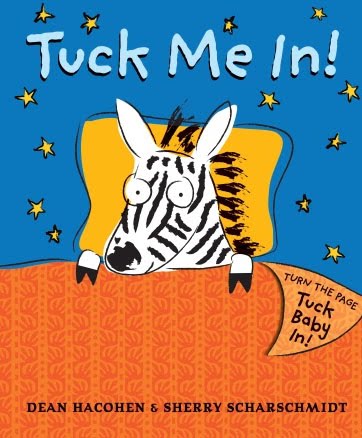 I think this book is adorable!

Which is why I'm celebrating it even though it is officially a picture book and we usually blog about board and novelty books for totz here on readertotz. But Tuck Me In could so easily become a lift-the-flap board book. The text is simple, the subject is dear and familiar to totz, and the illustrations are young and have eye-appeal. Most of the pages show an animal with a big flap that is to be used as a blanket. I love that this book empowers totz to take the adult action of tucking in a baby--animal babies in this case.

From the back cover:

All the Baby Animals are ready for bed.
Will you help tuck them in?
You will? Great!
Just turn the pages and tuck them in, one by one.
(And don't forget to say "Good night!")

Tuck Me In!
Dean Hacohen and Sherry Scharschmidt
Candlewick Press, 2010
Posted by Joan Holub at 12:00 AM 1 comment:

I hope you'll join me in celebrating my new rhyming lift-the-large-flap board book from Scholastic/Cartwheel Books, What Does Cow Say?

Story scoop: These farm animals have big mouths! When the sun came up, Duck went Quack which woke his neighbor, Cow, who went MOO, which woke Rooster who went Cock-a-doodle-doo. . . As each animal awakens, totz can guess what it says and open its big-flap beak, snout, or mouth to read its signature sound. The final spread shows a child waking up--with open arms and a final HOORAY! to welcome the day!

Art scoop: Instead of a manuscript, I submitted this 2-page dummy to Scholastic/Cartwheel for consideration. All the mouths had working flaps taped over them, so they'd lift to reveal the animal sound below. A lot goes into creating these seemingly uncomplicated books. For instance, the title and some of the text changed during the editing process. And as you can see, artist Jannie Ho made the book way cuter than my proposal. 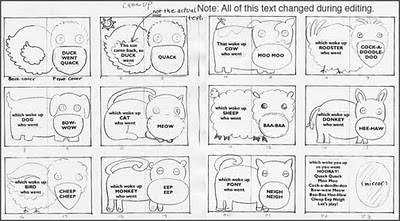 Lucky me to have Jannie illustrate this book! She studied illustration at Parsons School of Design in NYC, and was a designer at Nickelodeon, Scholastic, and associate art director at TIME Magazine for Kids before becoming a full-time illustrator. Wow!