For the Older Sibling: A Walk in New York, Salvatore Rubbino

Dia Calhoun and I recently were in New York City as our totz sister site, readergirlz was honored by the National Book Foundation with the first Innovations in Reading Prize. 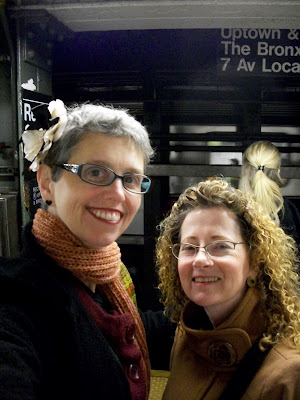 We were thrilled to attend the celebrations. This was my first trip to the city, and I wish I had Salvatore Rubbino's picture book with me: A Walk in New York. Seriously! Dia and I would have been right on target finding those lions in front of the New York Public Library. And we would have known there are 10,000 new books each week and 88 miles of shelves!

I chose this work for the older sibling of your totz because it is retro, beautiful, and so helpful! The mixed media capturing textures, flat shapes of color, and predominantly a pencil line represent the beauty and abundant life of New York City. Interspersed are facts about each sightseeing location.

"The library lions are called
Patience and Fortitude.
They're made of pink marble
from Tennessee."

The smaller font amidst the very hip MkLang Bold typeset does not detract from the main story of a father showing his son Manhattan for the first time.

With A Walk in New York, I would have known:

"The only way you can catch a New York cab is if you hail it."

Not by asking the concierge to call one. I would have known to go up to the ground level at Grand Central to see the clock and night sky ceiling. And I would have realized there are 67 tracks with 125,000 people traveling.

I would have known where to stand to see the Statue of Liberty. *sigh* Even the end pages which are simple maps would have been helpful. So here's to my next visit. In the meantime, I'll enjoy this beautiful Candlewick Press book from Salvatore. It's a gem that is worthy of award recognition.

A Walk in New York
by Salvatore Rubbino
Candlewick Press, 2009
Posted by Lorie Ann Grover at 7:00 AM

What a great photo of you and Dia, and it sounds like a great time. I love NYC. Only wish I'd been there to see you get the award.

Okay, I definitely have to buy this book now even though my toddler is not yet ready for it. My husband is from New York, so I'll give it to him for a present! Thanks for letting me know about it.

sneakers shoes
Nike Tn
he was interrupted,
discount nike shoes
nike shox r4
tn dollar
He replied, "Yes......you are right! I haven't been looking for anyone for the past years."
With that, the man darted across the floor and out the door,
cheap nike shoes
All along he has found his girl.
nike tennis shoes That was why he did not bother to look further when he realized she was not coming back. It was not any specific girl he was seeking!
cheap nike shoxIt was perfection that he wanted, and yes.....perfection!!
Relationship is something both parties should work on. Realizing that he had let away someone so important in his life, he decided to call her immediately. His whole mind was flooded with fear.
free shipping shoes He was afraid that she might have found someone new or no longer had the same feelings anymore..... For once,
Paypal Credit card Accepthe felt the fear of losing someone.
nike shoes
nike discount shoes
,cheap puma shoes
nike shox shoes
chaussures nikeHow he damned the Gods...!!
nike free shoes How he hated himself....for taking so long to realize his mistake!! That was in 1996.
buy shoes onlineYou may painfully regret, only to realise that it is too late.