No More Diapers for Ducky: Bernette Ford and Sam Williams 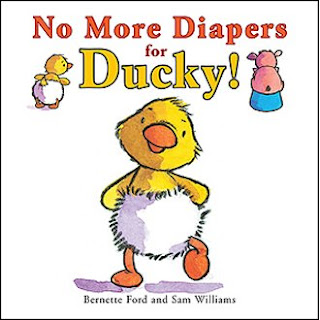 I found this board book in my library and was immediately drawn to the adorable illustrations and the diaper on the front cover. The diaper is actually white terrycloth, adding a nice tactile experience for young readers. Once I got past the cool cover, I was pulled into the story in which two friends learn by imitating one another.

As the story opens, diaper-wearing Ducky visits her friend Piggy, hoping to play. Piggy informs her through the closed bathroom door that he’s on the potty. The art shows us he’s passing the time reading.

So Ducky waits, playing alone in Piggy’s room. She knocks again, almost immediately, asking if Piggy can “come out now.” Alas, Piggy informs her that he’s still on the potty.

Soon Ducky begins to notice that her diaper is uncomfortable. It’s wet and cold. She wriggles out of it and kicks it away. I like the action here, which puts Ducky in charge of this decision.

Then Ducky knocks yet a third time, telling Piggy she needs to use the potty herself. Surprised, Piggy protests that she wears diapers, to which she replies, “Not anymore.”

Piggy dresses, washes his hands (a helpful reminder), and then lets Ducky in. Piggy goes to play with his toys and books while Ducky uses the potty. In a humorous role reversal, Piggy eventually calls through the bathroom door to Ducky, asking her to “come out and play.” Of course she’s the one who’s busy now, sitting on the potty.

William's simple, charming illustrations do a wonderful job of capturing the characters’ emotions with a few active strokes of a black pencil. Piggy’s protesting expression as he informs Ducky that he’s still busy, is accomplished with the sparest of lines. Ducky’s grimace when she eventually demands to use the potty is right-on.

Ford’s non-rhyming prose empathizes with the characters as it captures a moment when toddlers are called upon to cope with developmental growth and change.

Thanks so much for this wonderful review! I had no idea this book existed. My last name is "Duckworth," so we naturally refer to our kids as "little ducks." I plan to pick this book up as a gift to my youngest. She waddles around the house in her diaper all day. Love the illustrations.

My sister really likes ducks so maybe we should buy it for her. And my brother Elijah has the same problem the duck has, so it would be a good book for our family for two reasons!

This is adorable and new for the subject! Thanks, Joan!

Hi Jeff! Thanks for stopping by. I've always wished for a last name with a real word within it, such as Duck. Just look at the cool puns you've come up with for yours. :o)

And hello Gracie--I'm so glad you enjoyed Knuckleheads! I enjoy your blog every time I visit. It's very interesting to read what you and the other Z-Kids are saying about books you read.