February Pick for the Older Sibling: A Friend for Dragon

Before there was Captain Underpants, there was Dragon, the endearing star of three early chapter books by Dav Pilkey that began with A Friend for Dragon. It's rare and wonderful when a book tugs at both my heart and my funny bone. This is one of those books.

Dragon longs for a friend. After being turned down by several candidates he approaches, he's ripe for the practical joke a snake-in-the-grass plays on him. When an apple falls from a tree and hits Dragon on the head, the snake tricks him into believing the apple can speak. Not only that, the apple announces that it wants to be Dragon's friend.

Dragon and apple have some good times together, but when apple is eaten by a stranger, Dragon is devastated. I felt a true sense of loss when this happened. Amazing that Pilkey could pull this off, but he does! I think my love for Dragon has something to do with the fact that he is so believably goodhearted and gullible in the way of many young children, which made me want to protect him from hurt.

Dragon buries his pal the apple and mourns him. Time passes and a new apple tree grows, bringing new friends to a delighted Dragon.

"He wished for a friend.
Suddenly something fell
out of the tree and hit Dragon
on the head.
It was an apple." 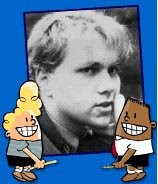 Inside Scoop:
True to form, Dav Pilkey created his bio as "adventures" in cartoon style, depicting himself as having artistic inclinations immediately upon his birth, much to the dismay of a hospital nurse. If your totz' siblings are eager for more, his site also has a variety of games and a text bio, which I particularly enjoyed.

This ranks as one of the best books I own, Joan! I LOVE IT!

And I have to brag. I have a postersize sketch in my office done by Dav. Woohoo! It's of Kat Kong. :~)

Thanks for reviewing this book!

Oh, man! A Dav sketch in your office sending creative vibes all day long. How cool is that?

This is one of my all-time favorites, too. I think it would've won a Geisel if the award had been around back then. They should do some retroactive Geisels. :o)

The Dragon books are fun. I like the cats. :)