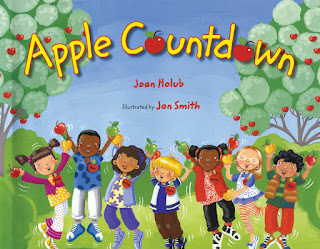 Enjoy the simple fun of apple-picking as nineteen kids + their teacher venture forth on their class field trip to an apple farm, counting down from 20 to 1 along the way. Young readers will be swept up in this story, which teaches basic math concepts such as grouping and simple addition as well as instructions on how to pick an apple and apple facts.

“Twenty apples with our names,” says James. “I see a tag for me,” says Lee.
“Nineteen kids get on our bus,” says Russ. “I share with Mr. Yee,” says Lee.
“Eighteen miles till we’re there,” says Claire. “Eight miles, turn, then go ten,” says Ben.

“Until recently, I lived in Washington state—the state that grows the most apples,” says Holub. “I went on a class trip to an apple farm in eastern Washington one October--the month when most apples are picked. Picking and eating the apples was the most fun. We saw cows and ducks and learned apple facts, which I share in the book. For instance, did you know apples float because they are 25% air? Or that an apple has a five-pointed star inside, each point having 1 or 2 seeds, for a total of 5 to 10 seeds in every apple?”

readertotz is a blog which showcases infant-toddler books as an important addition to children's literature. http://readertotz.blogspot.com

Joan Holub is the author and/or illustrator of over 120 books for children (Knuckleheads; Bed Bats & Beyond; Why Do Cats Meow?), including a chapter book biography titled Who Was Johnny Appleseed? She began her career in children's books at age six, when she created her first book dummy, and she has since worked as an art director at a major publishing company.

Jan Smith is an illustrator from England, who has illustrated over fifty titles, and enjoys salsa dancing.

Best wishes with the release! :)

Thank you so much, Little Willow! So far so good on the new release. I hope all is well with you.

YAY FOR JOAN! I'm so happy for you!

Does everyone know Joan has published over 100 books for children? Woohoo!

You're a sweetie, Lorie Ann! Thanks. :o)