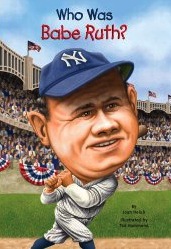 Just in time for baseball season, I'm celebrating the release of my new chapter book biography! I'm a huge biography fan, so I thoroughly enjoy writing for Grosset & Dunlap's "Who Was" series. Also known as the "big head" biography series because of the striking cover illustrations. You can see a nice assortment of the titles in a face-out display at Barnes & Noble in the children's section.

Babe Ruth came from a poor Baltimore family and, as a kid, he was a handful. It was at a reform school that he discovered his talent for baseball, and by the age of nineteen, he was on his way to becoming a sports legend. Babe was often out of shape and even more often out on the town, but he had a big heart and an even bigger swing! Kids will learn all about the Home Run King in this rags-to-riches sports biography. With black-and-white illustrations throughout.
This is my 4th title in the series for ages 7-11:
Who Was Johnny Appleseed?
Who Was Marco Polo?
Who Was Jim Henson?
Who Was Babe Ruth?

Drop a comment at joanholub.blogspot.com for a chance to win an autographed copy! Winner will be announced on my blog in the comments on or about January 19th. Please either leave a contact email or be sure to check back to see if you're the winner.

Congrats, Joan! So proud of you!

Wow, amazing blog layout! How long have you been blogging for? you made blogging look easy. The overall look of your web site is magnificent, let alone the content!
WIDE LEG PANTS