It's as awesome as I hoped! Match the 23rd Psalm with the paintings of Richard Jesse Watson, and you have a classic. I'm so thankful Zonderkidz and Watson brought this book to our shelves. What a work of truth, comfort, strength, and beauty. Truly. It's as if you fall into this great book as it quotes the King James Version of the most popular Psalm of David.

Watson's bold, brushstrokes are layered and create beautiful tones and textures. There's a nod to Byzantine imagery with golden halos while there's also a loose, free line throughout, allowing the spreads to breathe. Modern children and lambs are included in the illustrations; we are all lambs being led. Rich endpapers portray eight child shepherds from around the world. 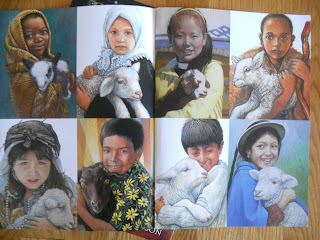 You don't want to miss this masterpiece in children's literature. Share it with the older siblings of your readertotz! Let's hope there will be a board book edition...