For the Older Sibs: Wonder Women, a Bingo Game 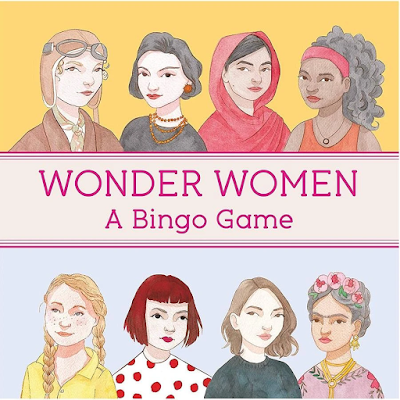 Looking for another activity to round out the homeschooling Covid day? Wonder Women, a Bingo Game is a fun, educational resource. Illustrated by Laura Bernard, released by Magma for Laurence King, Isabel Thomas provides text for each woman featured.

The featured women include Annie Leibovitz, Chimamanda Ngozi Adichie, and Yayoi Kusama. Here's a portion of the entry for Jacinda Ardern:

"Jacinda became involved in politics as a teenager and began campaigning for a kinder and fairer world. She became an MP in the New Zealand parliament at 28 and Prime Minister of New Zealand at 37-its youngest leader for 150 years."

And then you know how bingo rolls. Get your card and select your caller. It's time for B-I-N-G-O!

Wonder Women, a Bingo Game
by Isabel Thomas
illustrated by Laura Bernard
Magma, for Laurence King
Posted by Lorie Ann Grover at 10:59 AM