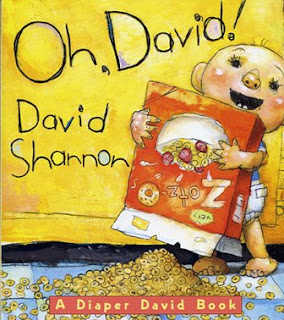 I’m a fan of David Shannon’s picture book, No, David!, which was named a Caldecott Honor Book, an ALA Notable Children's Book, and a New York Times Best Illustrated Book of the Year, and which lead to two more bestselling picture books about David. So I was interested when I ran across the three “Diaper David” board books, which explore the mischievous David’s toddler years.
Oh, David! is my favorite of the three board books, though I like them all. There are only twenty-one words in this sturdy fourteen-page book in which a gleeful David takes center stage as he unrolls toilet tissue, rebuffs his dinner, and empties a box of cereal. But no matter what he does, his mother loves him--and I do, too. 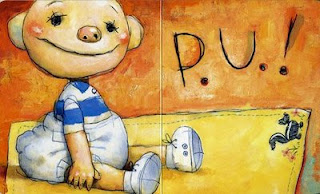 Trying to choose which pages to display wasn’t easy because the illustrations in this book are all hilarious. The expression on David’s face here is so endearing, and he seems so proud of his, um, accomplishment. The little skunk on his blanket is a nice touch. There’s another spread that ties with this one for my affections. It's the one in which David seems to have more than the usual number of arms and legs as Mom tries to wrangle him into a pair of pjs.
Inside Scoop:
You can view a series of five video interviews with David Shannon on Scholastic’s site, including one in which he offers advice for kids who want to be artists. I also found this cool quote on the site:

"A few years ago, my mother sent me a book I made when I was a little boy. It was called No, David, and it was illustrated with drawings of David doing all sorts of things he wasn't supposed to do. The text consisted entirely of the words "no" and "David." (They were the only words I knew how to spell.) I thought it would be fun to do a remake celebrating those familiar variations of the universal "no" that we all hear while growing. Of course, "yes" is a wonderful word...but "yes" doesn't keep crayon off the living room wall." -- David Shannon
Interested in owning the original art from Oh, David! or some of David Shannon's other books? Some of it’s available at Every Picture Tells A Story.

My mother in law has No David in her stash of children's books and I just saw it for the first time a few weeks ago. My husband (her oldest son) is named David, and she is especially fond of the book.

I'm a parent who tries to avoid yelling "No!" most of the time, but "please don't do that" and "walk, please" don't sound like interesting book verse either. Maybe "hold my hand" has potential....

"No" or "Stop" are often my knee-jerk responses when I see something that shouldn't be happening. They're just the words that come out. Children must get really tired of hearing these words directed toward them, which is probably why it's fun for them to see them directed toward the mischievous David.

yeah perfect to teach the first steps in reading world, Buy Viagra is my favorite book of this artist, by the way the last week I bought a book for my child, if my memory don't fail me is the one in the post.