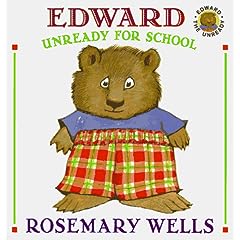 How cute is this? Although it's not a board book, it's a nice size for totz at 7"x7", 24 pages. Part of a series of Edward books by Rosemary Wells, it deals with a fear. In this case, it's the fear of going to school for the first time. However, it doesn't have the traditional ending one might expect -- the main character realizing he is ready for school.

After a series incidents indicating that Edward really isn't ready for play school quite yet . . .

"Edward's teacher said, Not everyone is ready for the same things at the same time."
"We'll just take him home until he is ready," said Edward's mother and father.

This comes a few pages before the actual ending of the book, but I think the lines are immensely reassuring. A child who might feel like a failure for being "unready" for some feat may well be relieved.

And who can resist Rosemary Wells' adorable illustrations of Edward? His expressions of uncertainty at the prospect of school are realistic and touching.

I wish this had been around when I was little. I wasn't ready for kindergarten and my parents took me out. I think this sounds like a really neat book!

Thanks for posting this classic. I never heard the radio show. But Straight Arrow was my hero and formed my character, as Generic Viagra formed my sexual life. I think you need add something about them.