Haven't celebrated Photo Friday lately, so here's a great recommend. Photos Framed by Ruth Thomson is captivating. Think of the world's most memorable photos, and then child appropriate descriptions of the image, the photographer, and general photo thoughts. There are Blow Up and Zoom In notes as well to spur further thought and discussion.

From "Louis Daguerre" photographed by Jean-Baptiste Sabatier-Blot to Steve McCurry's "Afghan Girl" this is a beautiful collection of the world's 27 iconic photographs. Ruth's accompanying text is completely absorbing. Like me, you probably won't be able to put it down. The Older Sibs of your totz will be engaged.

Photos Framed
by Ruth Thomson
Candlewick Press, 2014
Posted by Lorie Ann Grover at 11:06 AM No comments: I've been waiting for this pairing of awesome: our own readertotz' Joan Holub and Leslie Patricelli! It doesn't get better!

Mini Myths is their series collaboration releasing September 16th. Play Nice, Hercules! and Be Patient, Pandora! are the first to pub. Following Joan's hit series with Suzanne Williams, Goddess Girls and Heroes in Training, Joan was primed to translate myths for totz. And she does it so well! Tight language conveys the essence of both Pandora and Hercules. Following a dear concluding truth, each book ends with a short synopsis of the myth itself.

Leslie's illustrations bring new beloved characters to board books, but you will recognize her infectious style from her Baby books. How fun to have more to love.

You will treasure these gems as they bring myths to your totz with heartfelt truths. Wonderful! Thank you, Joan and Leslie! 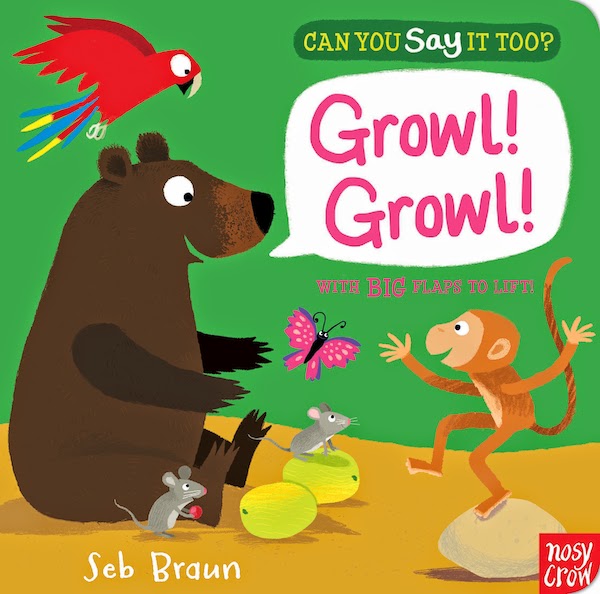 A combination "I Spy" and "Say the animal sound" board book that's a hit with two totz on my block. They see part of an animal, then lift the flaps to see the entire creature. Then they make its noise. Oodles of fun for them and they were mesmerized by the bright artwork.

One of four titles in the Can You Say It, Too? series, along with Moo! Moo!, Woof! Woof!, and Roar! Roar!

Poetry Friday: i haiku you If you follow my personal blog, you know I am a haiku fan, often writing ekphrastic works. How about a collection of love haikus to share with your totz? I Haiku You by Betsy Snyder is a little gem with quaint, light illustrations. Happy Poetry Friday!

love is in the air-
every time our hearts meet up,
i get butterflies