More, More, More: Of Thee I Sing, A Letter to My Daughters 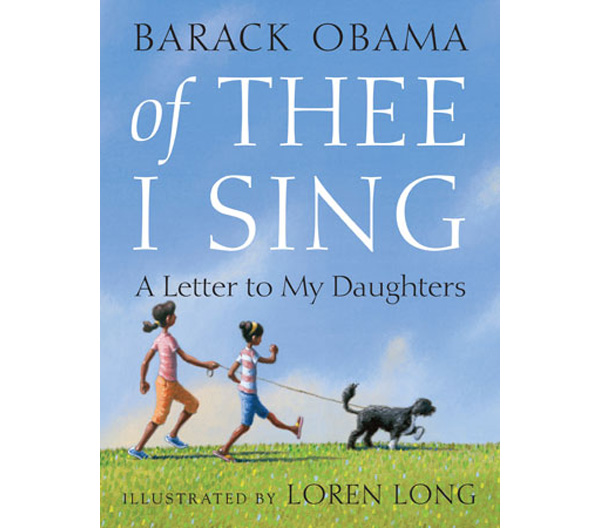 Okay, I was skeptical. A picture book from President Barack Obama? Does he have time to write a picture book? I first was happy to see that the project was acquired and concluded prior to his taking office.

Secondly, I was moved to see that all the proceeds will be donated to a fund for children of fallen or disabled soldiers. Random House is also contributing to the scholarship fund.

With those facts on the table, I opened the work and was honestly moved by the text and art. Here is a letter to President Obama's daughters which honestly reads like a love letter to our entire nation. It is a pause in our stream of history to applaud great Americans and be inspired by them. Different races, genders, and contributions are showcased, from Georgia O'Keefe to Sitting Bull. President Obama shares what we have gleaned from each of the Americans. Helen Keller gave us courage, Neil Armstrong made us brave to "take our own big, bold strides."

Loren Long's acrylic paintings on board are the perfect accompaniment to the text. There's something intrinsically right in the medium on board. I particularly love how she adds each character to the left side of the page to join the Obama sisters. It's a beautiful rhythm that is finally hit with a full spread of all kinds of American children.

And then the final stanza:

Such a beautiful balance of patriotism and familial love. Thanks to the entire team, including Executive Editor Michelle Frey. Bravo!

Of Thee I Sing: A Letter to My Daughters
by Barack Obama
illustrated by Loren Long
Random House, Alfred A. Knopf, 2010
Posted by Lorie Ann Grover at 12:23 PM