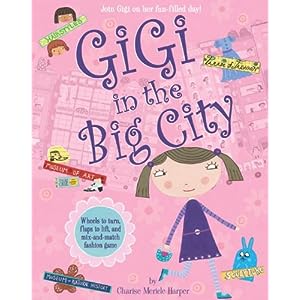 Gigi in the Big City is packed full of lift-the-flap and turn the dial fun! Author/illustrator Charise Mericle Harper has created an amazing day in the city for her character. Bravo to Robin Corey Books for investing all out in the concept.

For more mature totz, (Publishers Weekly advises 4-8) each page is filled with little flaps, pull tabs, and dials which flesh out Gigi's city experience. Multiple layers allow you to dress Gigi in various outfits before she heads off to the museums packed full of imagery. She considers the people she passes and dips into their stories, has a makeover, and concludes the day by writing and dreaming.

Joan is going to LOVE this work as it's packed full of interesting nonfiction facts. From definitions, to examples of shoes, gems, and mythical creatures, to types of books, there's so much to explore!

Gigi and her world are rendered with flat shapes with high kid appeal and a bit of funk to keep things lively. Enter the Big City with Gigi and be ready to be wowed!

Kudos to the team for bringing the board/novelty format to an older audience. Woot!

Gigi in the Big City
by Charise Mericle Harper
Robin Corey Books, 2010
Posted by Lorie Ann Grover at 7:00 AM